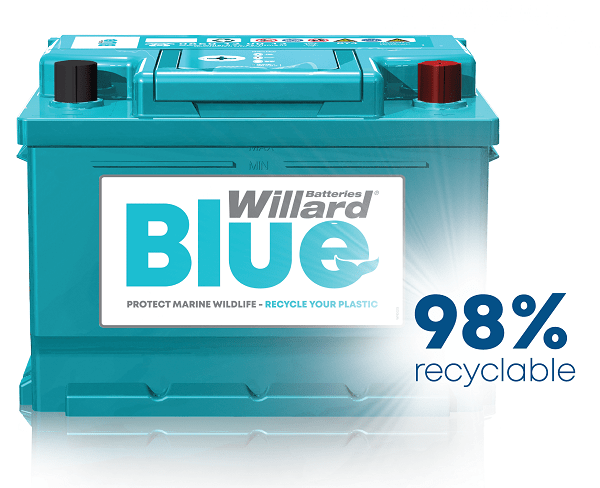 What do vehicle automotive components and the ocean have in common? Not much. But awareness of plastic pollution is a growing concern.

The world’s oceans produce 70% of our oxygen, absorb vast amounts of carbon dioxide and drive the Earth’s weather systems. Our oceans are an essential source of food, and feed over a billion people. Floating plastic within the ocean poses a serious threat to fish, seabirds, marine reptiles and marine mammals.

Ten percent of the world’s population rely on fishing-related activities for their livelihoods, from commercial and small-scale fishing, to transport and tourism.

Corne Strydom, Sales and Marketing Executive at AutoX, manufacturer and distributor of Willard® Batteries in South Africa, says that plastic waste affects all the world’s oceans. “We believe that very little effort is currently applied to this in South Africa. It is estimated that 8.8 million metric tons of plastic waste is dumped in oceans each year, causing widespread harm to the marine environment.”

“Willard Batteries has a well-documented legacy of recycling scrap lead-acid batteries, 98% of which is recoverable, and out of which new batteries are manufactured. Highlighting the importance of collecting and recycling plastic waste plaguing our oceans and beaches is therefore a logical extension of this practice.”

“Collecting rubbish washed up on beaches is the easiest way to track litter at sea, and it helps to reduce the amounts of plastic in the environment.”

“In line with this, we are launching a limited-edition Willard BLUE battery. Available at selected retail outlets, the Willard BLUE Battery range aims to highlight the threat plastic poses to our oceans and beaches by encouraging the recycling of plastic.”

“We are emphasising the relationship between people and nature,” he says. “The Willard BLUE battery campaign is a great way for people to get behind the idea of recycling plastic and ensuring that it doesn’t pollute our oceans and beaches. We want to highlight the interconnectedness between people and nature and how we all depend on a healthy, natural environment for our wellbeing.”

Willard’s first limited-edition battery was the successful eye-catching pink battery where a portion of the proceeds went to the Breast Cancer Community Carer, PinkDrive. Next came the limited-edition Rhino battery, a rugged, resilient battery which was developed to cope with the harsh conditions faced by game rangers’ vehicles as they help protect our rhinos. The limited-edition Red battery highlighted the importance of donating blood and many people responded enthusiastically to the call to action.

Willard Batteries are manufactured in Port Elizabeth and has been present in South Africa since the 1920’s. Production started in Port Elizabeth, South Africa, in 1954. Rated amongst consumers as their favourite battery brand of choice, Willard Batteries is the preferred supplier of a comprehensive range of premium quality automotive batteries to the replacement market. (Independent Research).

Research results indicate widespread support of the Willard Batteries brand. Apart from being voted the most loved automotive battery, research has once again confirmed the high level of brand awareness and brand preference of Willard Batteries.

The product range is designed to cope with the harsh conditions of Africa. It also remains committed to its environmental responsibilities. The life cycle of a lead-acid battery follows a continuous, closed loop. When a scrap battery is collected and returned to Willard Batteries, its lead and plastic are reclaimed and directed to new battery manufacturing.

Over the years, Willard Batteries has built a strong track record of service excellence and has worked hard to establish the trust of its customers. It continues to maintain the core of the brand that has defined it: its values, its culture and the long-term relationships it has built with its customers. Looking to the future, Willard Batteries is committed to continue to build and live its brand legacy as it continues to strengthen its relationships with both its suppliers and its customers.